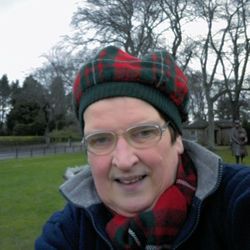 I was born in Hamburg, Germany, but aged 10 moved with my family to Surrey, England. Aged 18 I moved back to Germany and ended up as a Hotel Rep for TUI in Mallorca. After marrying a local, I stayed there for 26 years, perfecting my Spanish and acquiring excellent Mallorcan in the process.

I had for many years by then had a strong urge to visit Scotland, as my mother's maiden name was Gregor... I finally visited in 2000 and loved it! I soaked up Scottish history like a sponge from then on. After my marriage had broken down, I first moved to Ireland, then came to live and work in Moray in 2009 and have stayed here ever since.

I currently live in Forres, Moray, and have continued to gather much information of varying kinds over this time: Scotland’s history and that of the Northern Highlands and Moray regions particularly, including local historic figures like King MacBeth and Alexander Stewart, the Wolf of Badenoch.

I started out as a tour-guide at Glenfiddich Distillery, Dufftown, and from 2013 onwards have worked as a self-employed tour-guide. In 2016, I acquired my STGA Green Badge qualification for the Northern Highlands and Moray, and subsequently joined HOSTGA.

I studied Horticulture (SVQ2 and SVQ3) for two years at Moray College, Elgin, (2012 and 2013-14) as I am also a keen gardener and very knowledgeable about plants and their medicinal and possibly edible properties, learning more all the time.

Among my other interest  feature the native wildlife, both terrestrial and marine.